For the Anuak, land is essentially everything. . . . Land is identity and is survival for the community. . . . For the Anuak, the environment is their food source, for hunting, for fishing, for medicinal purposes. . . . They use the land, forest, and river; everything is very vital to their survival.

As part of the Oakland Institute’s (OI) continued research and reporting on the ever unfolding and unfortunately more distressing news coming out of Ethiopia, OI recently published a new briefing paper titled Unheard Voices: The Human Rights Impact of Land Investments on Indigenous Communities in Gambella. Prepared by the International Human Rights Clinic at New York University School of Law, this briefing paper provides an overview of the human rights impacts of land investment and the villagization process on the indigenous Anuak community in Ethiopia’s Gambella region. 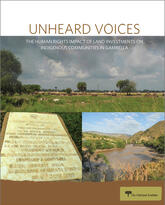 Unheard Voices builds on the Oakland Institute’s extensive in-country research on land investments in Ethiopia and features the testimony of two prominent indigenous human rights defenders and Anuak community members, Obang Metho of the Solidarity Movement for a New Ethiopia and Nyikaw Ochalla of the Anywaa Survival Organization. Most importantly, this report furthers the understanding of the impacts on the ground as land deals actively affect peoples’ lives. Because the government has made research and reporting within Ethiopia very risky for journalists and activists, this report and the stories told in it are a vital resource for the impacted communities to have their voices heard. The hope is that those outside of the government’s control can help take meaningful action to stop ongoing human rights abuses.

In my last blog entry, I explained Ethiopia's use of forced relocation, through the country’s villagization program, to clear lands and pave way for plantations, as well as the human rights abuses including rape, torture, and jailing of people in the Gambella region. Since 2010, the Ethiopian government has displaced hundreds of thousands of residents of indigenous communities from their ancestral lands, and has made these lands available to investors at giveaway prices. This, coupled with the government’s relocation process called “villagization,” has destroyed livelihoods, leaving small-scale farmers and pastoralist communities fearful for their own survival. These actions are in direct violation of Ethiopia’s obligations under international human rights law and the Ethiopian government has systematically failed to answer for these abuses. This is all while the government continues to tout the infrastructure and service-related benefits that have largely failed to materialize.

"When [the government] comes to take their land, it is without their knowledge, and in fact [the government] says that they no longer belonged to this land, [even though] the Anuak have owned it for generations. . . . [In one instance] the government told the Anuak people to load their cattle, goats, and chickens onto trucks so that they could be moved to outside villages." -- Nyikaw Ochalla

Ethiopian police and soldiers beat and arrest those who do not comply with this “voluntary program,” and individuals are only released on the condition that they support the program. Those who try to return, according to Metho, found “their homes were destroyed and the land was completely changed.”

Furthermore, once relocated, these communities of Anuak farmers are left to fend for themselves with substandard land to be cultivated statically, a way with which they have no experience. The Anuak’s cultivation practices rely on shifting cultivation on one plot of land for several years before moving on to another. Seven to ten years later, they return to begin the process all over. From self-sufficient and sustaining to becoming dependent on aid, Ochalla explains that the Anuak’s way of life is being destroyed: “The government is depriving the Anuak people of their memories, homeland, and traditional farming system. And the Anuak are leaving behind homes [they have lived in] for generations. . . . The Anuak are now mov[ed] to a land that cannot be inhabited, with no water, and no access to education. This has created so much impact on their livelihoods.” For Metho, these realities are equally disturbing. “For the indigenous people, [their land,] their one identity and existence as a people for their survival has been taken away by the very government that is supposed to protect them.”

In Gambella, like in other parts of the country where the Oakland Institute has investigated recent investments, the Ethiopian government never consulted the local people and they were not compensated for their land. Unfortunately, when it comes to the violation of rights and international human rights treaties, this is just the tip of the iceberg.

The Ethiopian government is in violation of no less than seven international human rights treaties, including the Covenant on Civil and Political Rights; the International Covenant on Economic, Social and Cultural Rights; the Convention on the Rights of the Child; and the Convention Against Torture and Other Cruel, Inhuman and Degrading Treatment or Punishment. These treaties are coupled with regional treaties including the African Charter on Human and Peoples’ Rights, among others. Signing these treaties is not a symbolic act; these treaties obligate the Ethiopian government to strive to not only meet these minimum standards, but also to surpass them. As pointed out in the report, these treaties also cover policies that may threaten human rights.

“Collectively, these treaties cover an expansive range of human rights, and the Ethiopian government has an obligation to respect, protect and fulfill them all. That means that not only must the government eschew policies that threaten or violate human rights, but it must also shield its people from the adverse behavior of third parties, including private investors.”

This creates a stark contrast between Ethiopia's international, regional, and local legal obligations and with its continuing of the villagization program that has and continues to destroy livelihoods and regularly violates the rights of people across Ethiopia.

The report sets forth a number of recommendations as first steps to be taken by relevant actors to end these heinous violations. These steps must be taken immediately to comply with obligations under international human rights law and to respond appropriately to the human rights abuses caused as a result of large-scale land investments and the villagization program in Ethiopia.

The Oakland Institute also called on foreign investors to:

As always, the Oakland Institute is dedicated to keeping you updated on the villagization process in Ethiopia. Please regularly check the OI's blog or our Facebook page for new developments.

Nickolas Johnson is the Policy Analyst at the Oakland Institute and is currently focusing on land investment deals, food security, human rights, and the environment.