In early February, the Oakland Institute organized a three-day forum in New Delhi with the Indian Social Action Forum, Kalpavriksh, and Centre for Social Development on the impact of large-scale land acquisitions in Ethiopia and India by private enterprises on indigenous communities in both countries. Since 2008, Ethiopia has leased out nearly 600,000 hectares of farmland to Indian agribusinesses--the largest share of investors in the country--to grow a range of export crops including cereals, pulses, and edible oils.

Originally, the plan was to hold a panel discussion on the first day between Indian policy makers, investors, and development and research organizations. But relevant Indian ministries and executives of major Indian investors in Ethiopian land--Karuturi Global, Ruchi Soya, and Emami Biotech--either declined or did not respond to the invitation or follow ups to attend the event. This was unfortunate. The hope was to have researchers, policymakers and business leaders discuss both the empirical evidence coming out of field investigations on current projects as well as ideas on the best policy framework for economic development in Ethiopia, and in Global South countries in general, since land investments in largely agrarian countries will inevitably impact rural employment, food security, and the fate of the environment. 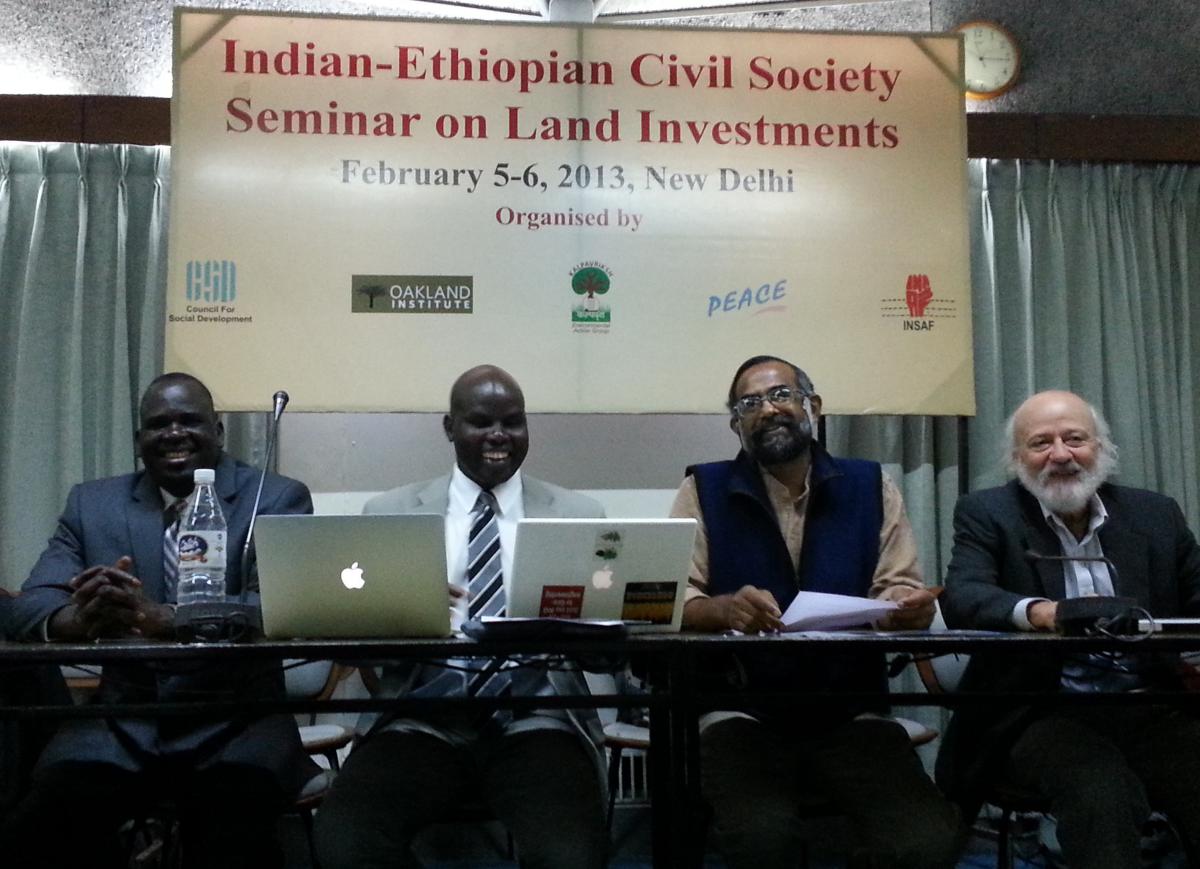 A diverse panel would have presented an opportunity for investors to respond to findings from multiple field investigations by the Oakland Institute and several other groups that the Ethiopian government has forcibly relocated thousands of villagers to make way for the newly sanctioned projects under a state policy known as “villigization”. The trend rings too familiar to human rights activists in India. Nearly 60 million people have been displaced by development projects in India since independence, according to the International Accountability Project. In the eastern state of Odisha villagers have been protesting the takeover of their land by Posco, a South Korean steel firm looking to produce 12 million tons of steel a year on 1,600 hectacres of land acquired by the state government.

Though policymakers and investors did not attend the event, members of nearly 60 Indian activist groups and two representatives from Ethiopian human rights organizations, Obang Metho (Solidarity Movement for a New Ethiopia) and Nyikaw Ochalla (Anywaa Survival Organization), met to discuss the need to urge governments and investors to enact an agricultural investment model that values human rights.

The Oakland Institute released two reports at the event that detail the impact of the villigazation program on local communities in Ethiopia’s Gambella and Lower Omo regions. The reports reveal that the Ethiopian government has not fulfilled promises of providing displaced people better access to water resources and primary schools in areas where they have been relocated. The researchers also found that the government has “perpetrated human rights abuses in resettling indigenous communities” who were not consulted or informed of the investments before the evictions took place.

Mr. Metho and Mr. Ochalla discussed human rights violations that have occurred in their country as a result of the land grabs. In Gambella, where most of the investment activity is taking place, Mr. Ochalla said that women have been raped and people have been imprisoned without trial. “As I stand in front of you,” he added at the afternoon press conference, “hundreds of thousands of small-scale farmers and pastoralists are being denied access to arable farmland, grazing and water sources, and hunting grounds.” Mr. Ochalla hails from a family of small holders in Gambella and served in the government’s education ministry but has lived in exile for many years. “I was threatened to the point of losing my life on several occasions,” he explained, “due to expressing my opinions, forced to resign from civil service employment, and detained without trial.”

Mr. Metho clarified that he is not opposed to investment spurring economic development. “We want an investment climate that is good for the people of India and the people of Ethiopia,” he said. “I am not anti-investment. But I am anti-daytime-robbery.”

He added: “When I see the videos the Guardian has taken of the affected communities in Gambella, I can name each of the people in the video. It is like someone taking a video of your neighborhood and being able to recognize everyone and everything there.”

Anuradha Mittal explained that OI started to research the issue in the context of the 2007-08 food price crisis. Investor countries began acquiring land in response to high food prices brought on by increased speculation in food commodities and a decline in the growth rate of world agricultural production. In the last five years, OI has looked at over 100 land deals in 8 African nations. Governments leased 56 million hectares of farmland to private investors in 2009 alone--75% of the activity occurred in food-insecure, politically unstable, and conflict prone nations in sub-Saharan Africa.

Dr. NC Saxena, a member of India’s National Advisory Council, also attended the event and said that land deals with similar loopholes have been carried out in India, neglecting the rights of the poor and resulting in large-scale displacements. Ashish Kothari, Executive Director of Kalpavriksh, added that, as in the case of Ethiopia, the highest percentage of India’s displaced people are tribals--40% of the 60 million people displaced in India since independence are tribals, who make up 7 to 8% of the total population.

The displacement of tribals in Ethiopia through the country’s villagization program, Mr. Metho said, is forcing more of its people to depend on international food aid. The country currently suffers endemic poverty and food insecurity--it is the fifth “hungriest” nation in the world according to the International Food Policy Research Institute’s 2012 Hunger Index. A reported 80% of the population is engaged in agriculture, while 8 million Ethiopians are deemed chronically hungry. Every year, 10 to 15 million people depend on food aid for their survival. 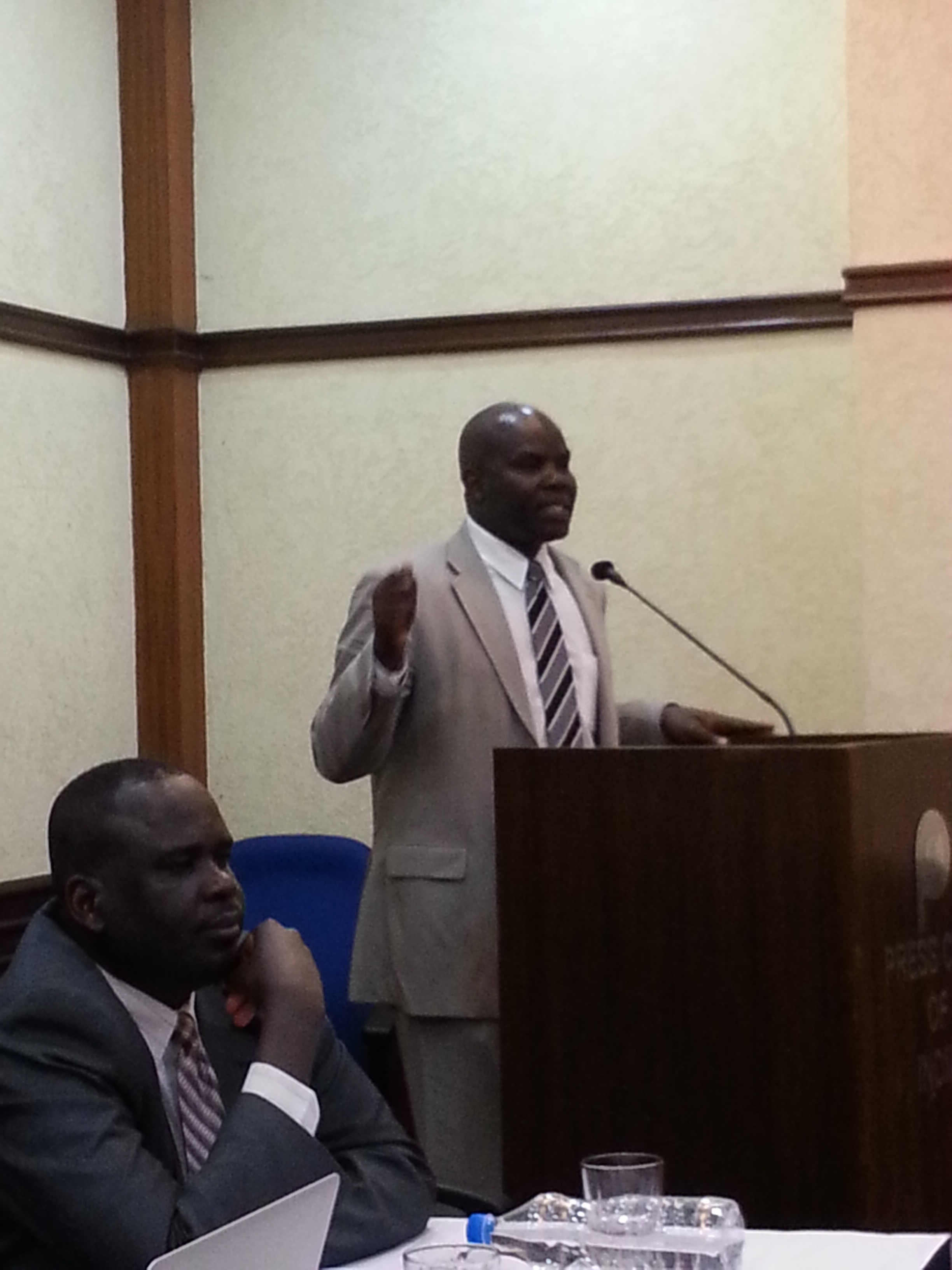 Various speakers at the press conference discussed the role foreign financial aid plays in the power India has established over Ethiopia. For example, India’s EXIM Bank has opened a $640 million credit line to the Ethiopian government to expand the country’s sugar sector. Currently, sugar is mostly produced by state owned enterprises in the country’s Lower Omo region. The credit line commits Ethiopia to import 75% of goods and services, such as consultancy services, from India.

International development and financial institutions have also played a role in helping the Ethiopian government attract investments by amending laws to help investors claim legitimate rights to land. A 2011 OI report showed, for instance, that the International Finance Corporation trained officials in the Ethiopian Investment Agency on how to promote investment through workshops on land appraisals. The agency also helped officials draft a legal framework for leasing land in the country and worked with Ethiopia’s leasing sector to establish the country’s first national land leasing company. The new OI investigation finds that the Ethiopian government now conducts deals directly with companies through this “centralized land-leasing bank.”

Investors may be acquiring land in Ethiopia in accordance with recent national laws and policies in the most technical sense. But such laws are not just. Land deals that are finalized without the consent of local people and that result in their displacement should also be viewed as violations of international human rights agreements that Ethiopia has signed--including the International Covenant on Civil and Political Rights and the International Covenant on Economic, Social and Cultural Rights. Foreign states and private corporations also have obligations to uphold the U.N. Guiding Principles for Business and Human Rights, which requires non-state actors to respect the rights of people in countries where they seek to do business.

“Law and order exist for the purpose of establishing justice and they fail in this purpose they become dangerously structured dams that block the flow of social progress,” Dr. Martin Luther King Jr. once wrote.

Investors, policymakers, and international development and human rights organizations alike should, at the least, openly debate how--and to what extent--creating and implementing laws to assure a powerful few rights to fertile land may undermine the human rights of people who depend on the same resources to survive.