Under the Table: Illegal Wood in Your Home

On Our Land, a new report and documentary film on land grabbing in Papua New Guinea (PNG), exposes an alarming global black market in contraband wood that is used in kitchens, bedrooms, and living rooms across Europe and the United States. Driven by demand for high-end furniture and flooring and aided by complex global laundering schemes, illegally felled timber is devastating forest-dependent communities, ravaging ecosystems, and depleting PNG of one of the country’s primary natural resources. 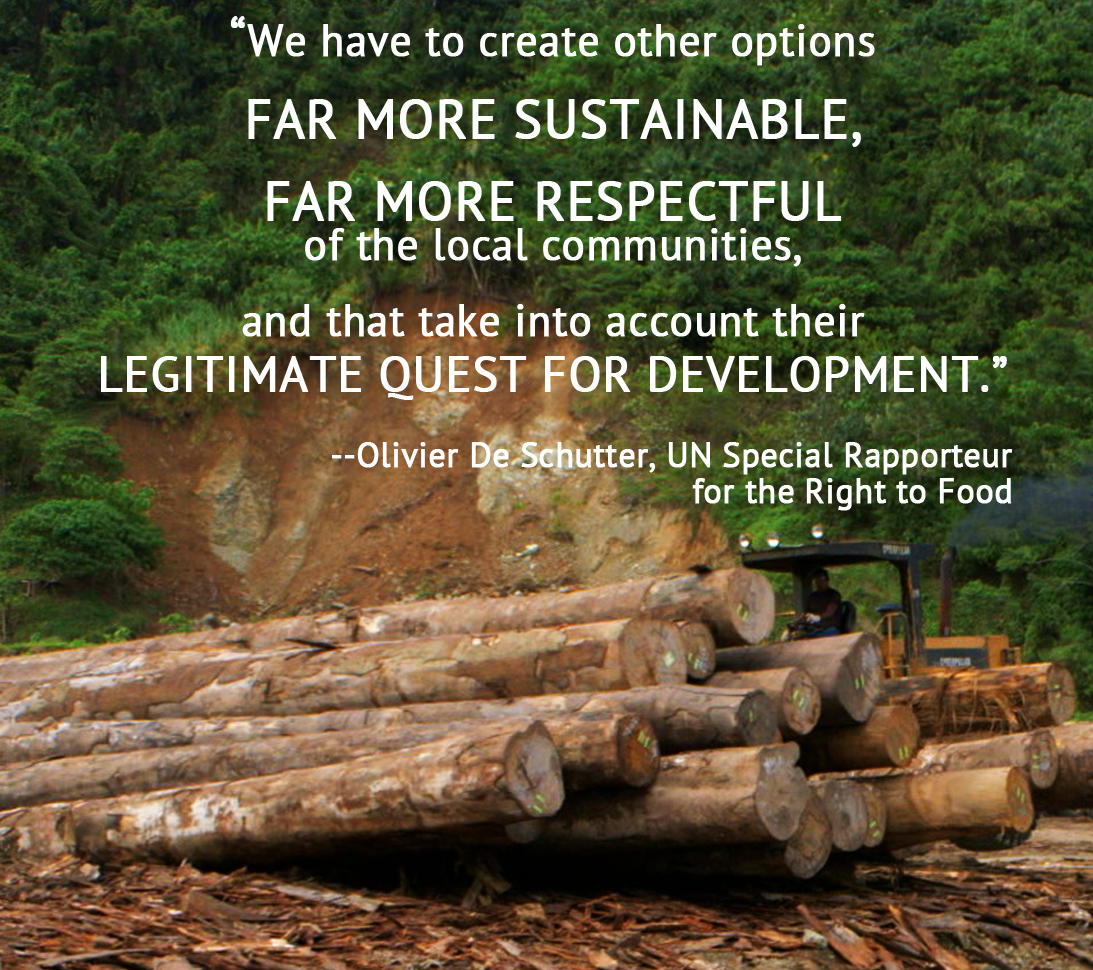 Strengthened regulations against illegal logging in several countries, including Indonesia and China, have resulted in companies turning to less regulated countries like PNG for fresh stocks. A review commissioned by the PNG government to assess the logging industry found that out of fourteen logging operations – including the five largest – none were defined as legal, and only one operation met more than fifty percent of key criteria for lawful logging operations. Despite these findings, the majority of wood from the PNG operations manages to enter the legal market. As stated by the government-commissioned review, “industry is allowed to ignore PNG laws and in fact gains preferential treatment in many cases, while the rural poor are left to suffer the social and environmental consequences of an industry that operates largely outside the regulatory system.” Practices have not changed following the review--rather,  PNG log exports have kept increasing, making the country now the second-largest exporter of tropical wood in the world, and the top supplier of tropical wood to China.

According to the International Tropical Timber Organization (ITTO), the primary destination for illegal timber from PNG is China,. Though China has strict laws against logging within its own borders, it has no problem importing conflict wood to sustain soaring domestic demand and to export around the world.

In spite of legal efforts to ban unlawful timber and wood products from passing US and EU borders, a 2012 INTERPOL report identifies the two among the main destinations for illegal wood and wood products in the world. As described by the Environmental Investigation Agency (EIA), China “functions as a ‘black box’ for illegally logged timber, in which the origins of illegally harvested timber are obscured as manufacturers mix is with legal sources.” Legal measures against illegally harvested wood and wood product imports are noteworthy steps towards increasing transparency, however, without China’s involvement in addressing global timber trafficking, illegally procured products will remain prevalent on the global market.

Where does this leave consumers? What options do we have when shopping for that new coffee table or remodeling our kitchen? At the very minimum, wood we purchase needs to be certified. This increases the transparency and credibility of the harvesting and processing practices for wood and wood products. To be sure, not all certification schemes are equal. The WWF, the Rainforest Alliance, Greenpeace International, and other environmental organizations consider the Forest Stewardship Council (FSC) certification program as the most credible certification system available.

However, new wood products and furniture pose a tricky problem for the consumer. Even when the merchant is knowledgeable about the origin, place of harvest, and supply chain of new wood products, suppliers often mislabel products in order to bypass US customs. Alternative and re-used materials are other options to consider. There are a growing number of non-wood materials, such as concrete, stone, composite lumber, and straw-bale that are readily available. Recycled and reclaimed lumber from houses, railroad tracks, and other sources is cheaper than certified lumber and does not produce a direct strain on forests and forest communities. Consumer choice matters in a global black market that easily transforms illegal wood to legal and widely available products. Using alternative materials and reclaimed or recycled wood will thus ensure that our actions are not contributing to rainforest and community destruction.

* Jettie Word is a 2013 Intern Scholar at the Oakland Institute.