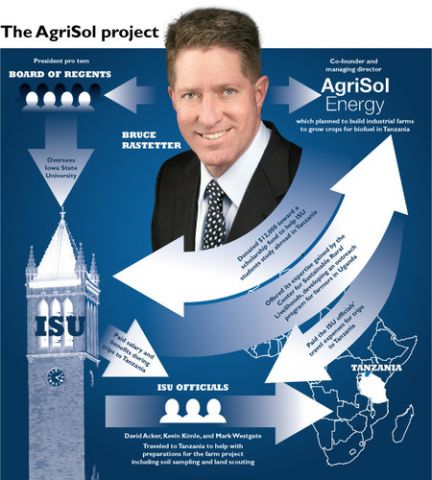 Is the 2015 “Iowa Agriculture Summit” really a bi-partisan forum to promote agriculture, or yet another scheme devised by multi-millionaire Iowan Bruce Rastetter to hijack issues impacting farmers and agriculture for his self-serving political and economic agenda?

Billed as an event to stimulate public discussion on “matters that directly affect Iowa farmers who feed and fuel not just the country, but the world,” several potential 2016 Presidential candidates have signed up for the event. A close look at the confirmed participants–Jeb Bush, Chris Christie, Scott Walker, and other GOP hopefuls–lays bare the play of partisan politics organized by Mr. Rastetter.

But first, let’s reflect on the credentials of the man these presidential hopefuls are signing up to share the podium with.

In 2011, Bruce Rastetter, as the CEO of AgriSol, acquired over 800,000 acres of land – supposedly three “abandoned refugee camps” – to set up an agriculture enterprise in Tanzania with plans for industrial-scale crop cultivation, livestock, and agrofuel production. The deal was negotiated with top Tanzanian leadership, including the Prime Minister of Tanzania.

With promises of wealth and development, it required changes in Tanzania’s regulations on cultivation of GM crops; “Strategic Investor Status” granting financial incentives; reduction in profit taxes; and the construction of rail infrastructure.

But most egregious was the fact, as exposed by the Oakland Institute in 2011, that the project would have displaced over 162,000 small-holder farmers–Burundian refugees who had made that land their home for over 40 years. The Tanzanian government was promising citizenship to these refugees, contingent on them abandoning their homes and livelihoods so AgriSol could take over their lands, all for the unbelievable price of around 23 cents per acre.

Bruce Rastetter, the “philanthropist,” has used money effectively to wield power in politics and the public realm. He donated more than $160,000 to Governor Branstad’s election in 2010, who appointed Rastetter to the Board of Regents of Iowa State University (ISU). The same university became involved in the AgriSol scheme, lending credibility that the project would “effectively and efficiently serve the interests of local communities and the country.”

The details of the deal, however, raised significant questions about conflicts of interest: it clearly wasn’t in the interest of local farmers, and Rastetter blurred roles as entrepreneur, regent and multi-million dollar donor to the university. With the public scandal that followed and student mobilization demanding his removal from the Board, ISU publically pulled out of the project with its image as a land grant university tarnished. Just a few months ago, in November 2014, the 162,000 who were promised forced displacement finally got their citizenship and are still farming their lands.

Other farmers haven’t seen such a happy ending from their encounter with Rastetter. As a former CEO of the 4th largest factory farm corporation (Heartland Pork) in the 1990’s, Rastetter was at odds with those he claims this summit is for. Many Iowa family livestock farmers still hold him accountable for driving them out of business.

So, what can we expect on Saturday, March 7th?

A one-sided conversation between a man who puts money above the most pressing social, environmental, and agricultural concerns faced by humanity today, and the leaders of the party he is helping fund to take office.

An honest reflection would dissuade any serious presidential candidate from engaging in this political circus planned by Mr. Bruce Rastetter.

Anuradha Mittal is the executive director of the Oakland Institute. For more information on AgriSol’s dealing in Tanzania, see: http://www.oaklandinstitute.org/land-deals-africa-agrisol-energy-llc. Anuradha will be a featured speaker at the Food & Ag Justice Summit, where her organization, Iowa Citizens for Community Improvement, and other organizations will outline a vision for agriculture that works with Earth & her people. For more info on the March 6 & 7 events, go to www.iowacci.org.

Anuradha Mittal, founder and executive director of the Oakland Institute, is an internationally renowned expert on development, human rights, and agriculture issues. Recipient of several awards, Anuradha Mittal was named the Most Valuable Thinker by the Nation magazine.