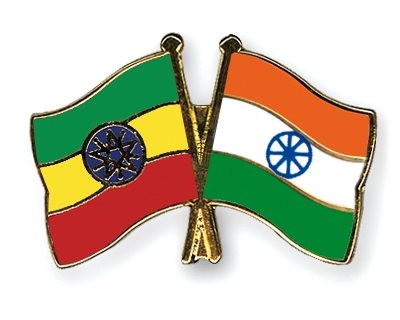 Mounting evidence indisputably shows that the brand of agricultural investment spreading in Ethiopia is accompanied by, or rather dependent upon, military violence and the suppression of civil rights.[1] On-the-ground investigations by OI and Human Rights Watch have exposed forced dispossession of land, illegal arrests, rape, and the loss of hundreds of lives in the hands of the Ethiopian Defense Force. However, this is a process not bounded by Ethiopia’s political border. Land investment deals in Ethiopia embody a nexus of global relationships. This is a convergence that brings together U.S. development and military interests, chemical producers, Indian capital and security training, western legal frameworks of legitimate land ownership, imperial-age irrigation infrastructure projects, and Ethiopian political ambitions. Among the most pronounced of these growing and mutually transformative relationships is that between Ethiopia and India. While the adverse effects of deepened Indian-Ethiopian relations are numerous, the upcoming Indian-Ethiopian Civil Society Summit on Land Investments will leverage these relationships to build cross-national resistance.

Perhaps the most obvious flows connecting India and Ethiopia are in the form of invisible capital. As of 2011, an estimated 600,000 hectares of Ethiopian land had been leased to Indian investors.[2] Any potential benefits from this stream of investment are quickly reverted, as most of the land grab investments produce non-food export crops and government tax concessions place the burden of government spending on Ethiopian workers. Similarly, the much more widespread process of land clearing for state-run export crop production is being financed largely with $640 million in credit from India’s Export-Import (EXIM) Bank.[3] Under conditions of the loan, the Ethiopian government has committed to importing 75 percent of goods and services from India. These financial relations are often the most widely publicized under the veneer of development and modernization.

However, these financial arrangements operate in tandem with cross-national practices of coercion. The late Ethiopian prime minister, Meles Zenawi, is noted for having presided over double-digit GDP growth, but as The Guardian noted, “poverty and intolerance…stain his legacy.”[4] The Ethiopian government’s “Villagization Program Action Plan,” which clears land that coincidently is also promoted for investment, has been implemented with military force. The environment of violence and terror has been chillingly described in Human Right Watch’s “Waiting Here For Death,” report.[5] Coincidently, the military strategies and training used to clear land for investment can be traced to another set of relationships with India. In 2012, the Times of India confirmed that the Indian military is “training and writing the manual for the Ethiopian Army [the National Defense Force responsible for the aforementioned violence].”[6] In fact, the repression of social resistance to land investments is implied in the signed contracts between the Ethiopian government and private investors. As stipulated in several of the contracts, “[it is the] state’s obligation to ‘deliver and hand over the vacant possession of leased land free of impediments’ and to provide free security “against any riot, disturbance or any turbulent time.’”[7]

It should be noted that the deepened relations between Ethiopia and India that I’m describing do not constitute globalization in the conventional sense. Popularly thought of as the process by which, owing to technological and the market innovations, the globe becomes smaller and more connected, the plight of Ethiopian farmers illustrates how the spread of technology and the globalization of commodity markets also deprive populations of domestic food production, restrict their mobility, and deny them self-determination and access to communication. As the OI has learned, even in this “globalized age,” government pressure and infrastructure designed for exporting--not travel--make transporting Ethiopian activists to India to take part in the civil society summit a most difficult task. Globalization, it must be acknowledged, connects some by disenfranchising others.

The upcoming conference in New Delhi (February 6th) is an opportunity to leverage growing cross-national connections in order to build intercontinental social resistance. While farmers in Ethiopia and India occupy nations on opposing sides of an exploitative relationship, in the nexus model of globalization both these communities are marginalized by linkages of investment and militarism.

Just last week, the United States Agency for International Development (USAID) signed a $3 million agreement with the Ethiopian government and chemical producer DuPont. The agreement promises to increase food security (increasing yields by 20 percent) through the introduction of hybrid maize seed. Farmers in India will recognize the false promises being made by USAID. As the last decades of harrowing farmer mass suicides in India has revealed, “[chemical] corporations changed the input economy overnight. Farm saved seeds were replaced by corporate seeds that needed fertilizers and pesticides and could not be saved.”[8] The resulting reliance on “modern” agricultural inputs, Indian farmers have learned, erodes land fertility and generates debt dependence.

The sharing of experiences that will occur at the summit will begin to forge a different type of Indian-Ethiopian relationship—one based on shared memories and histories of marginalization. The struggle will begin with a demand for recognition, not simply of the violence both Ethiopian and Indian rural communities endure, but also recognition of alternative claims to land, agro-ecological farming practices, and non-western social relationships. Just as investment and militarism gain strength through intercontinental expansion, so too will the social reaction to them.

Luis Flores is a recent graduate of the University of California at Berkeley, with degrees in Political Economy and History. He is currently an intern scholar at the Oakland Institute.

[7] See contracts on the Oakland Institute website at http://www.oaklandinstitute.org/land-deals-africa-ethiopia.

[8] Vandana Shiva, “The Suicide Economy of Corporate Globalisation,” Countercurrents.org, (April, 2004); for evidence of dependence brought on by hybrid inputs in Latin America see: Clara Ines Nicholls and Miguel A. Altieri, “Conventional agricultural development models and the persistence of the pesticide treadmill in Latin America,” International Journal of Sustainable Development and World Ecology, 4 (1997), 93-111; Gerardo Otero and Gabriela Pechlaner, “Is Biotechnology the Answer? The Evidence From NAFTA,” NACLA Report on the Americas: Food Crisis, (May/June 2009), 27-31.