Bruce Wrobel, the CEO of Herakles Farms and founder of the nonprofit organization All for Africa, is a self-proclaimed “environmentalist and activist for the poor.”[1] Upon first glance, his initiatives in Africa seem to support these claims--but scratch the surface and the evidence to the contrary is overwhelming. A new report by the Oakland Institute and Greenpeace, Herakles Exposed, reveals the company’s internal documents that highlight the discrepancy between the image Bruce Wrobel hopes to cultivate and his company’s actual practices. As shown in the report, Herakles Farms not only sidesteps sustainable practices, but also appears to be caught in an unstable financial situation in spite of its attempts to bypass responsible social and ecological practices.

Herakles Farms says it is “committed to addressing the complex issues of food security through sustainable agriculture initiatives,”[2] and All for Africa’s main stated goal is to plant one million trees for sustainability. On the surface, the Herakles Farms palm oil plantation initiative in southwest Cameroon may seem like a win-win situation for the company and the environment; however, to achieve its goals, it intends to clear more than 70,000 hectares of tropical rainforest in the midst of a “biodiversity hotspot”[3] to establish a palm oil plantation. Herakles Farms does indeed seek to plant trees--oil palm trees--but massive deforestation is their real first step. 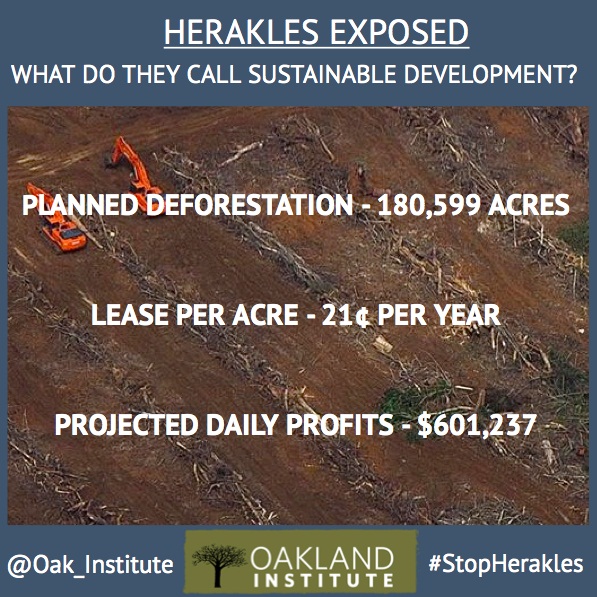 Under “Sustainability” on the Herakles Farms website, the company lists the many noble ways in which its operations “preserve and enhance the surrounding ecosystem,” including an agreement to not use High Conservation Value Forest (HCVF). (Attributes of HCVF include the existence of valuable concentrations of biodiversity, rare or endangered ecosystems, and services that are fundamental to the livelihoods of local communities.) However, this is only a superficial agreement that supports Wrobel’s attempt to portray a sustainable development image. Germany’s Agency for International Cooperation (GIZ), however, observed with regard to the Herakles Farms land lease, that “part of the concession area has to be considered as HCVF.”[4] The Africa Conservation Foundation agrees that the area is “currently covered by a mosaic of mature, dense forest, agro forest, farmland, and human settlements. […] This will be an environmental disaster for the rainforests in Cameroon.”[5] By clear-cutting the concession area, Herakles Farms will accomplish the exact opposite of their supposed goal to “preserve and enhance the surrounding ecosystem.”

If the trees must go, at least Herakles Farms has vowed that the profits from timber sales will go to the Cameroonian government. This, Wrobel contends, will compensate the government for the inexplicably low rental price Herakles Farms obtained: the company’s lease rate for the plantation land is a mere $1 per hectare. In an open letter responding to the first report on Herakles Farms from the Oakland Institute and Greenpeace, Wrobel insisted that this is a fair deal because the timber sales resulting from clearing the forest would directly benefit Cameroon: “we surrendered the timber to the government and took a lower lease rate . . . [this] will add huge value to the government’s timber income.”[6] However, internal documents reveal that even this small step toward accountable investment is unlikely to materialize. Herakles Farms documents used to attract investors cite the sale of timber as a source of “immediate profit uplift”[7] while the company waits for the palm trees to become mature enough to generate palm oil and become profitable. Herakles Farms is either misleading the public regarding its use of Cameroonian resources or the investors about sources of profit.

Inconsistencies in Herakles Farms documents presented to the public and to potential investors reveal the company’s deceitful side. Far from managing the firm in a way that benefits Cameroon, local communities, and the environment, the evidence of clear-cutting rainforest and hedging on the timber sale profits diametrically opposes the image of the friendly, development-minded company.

Across Africa, investors are spinning similar fictional stories. At first glance, many new agricultural initiatives appear socially, economically, and ecologically friendly. Companies conceal their intentions with nonprofit organizations that have sustainable-sounding goals. If Herakles Farms really did intend to benefit the local populations, the people of Cameroon, and the environment, it wouldn’t need a non-profit to shield it. In reality, the company’s deceptive tactics and lack of transparency suggest its investment in land is entirely profit-driven, and yet even those ambitions may not materialize. It doesn’t take too much digging to figure out that the “environmentalist and activist” image Wrobel seeks to cultivate is full of flaws and contradictions.

* Jettie Word is an Intern Scholar with the Oakland Institute who is interested in global and local trends in agriculture and conservation, and how the complexities of globalization interact with local initiatives.

[4] Observations on the SGSOC ESIA Report from GIZ and GFA/DFS Buea, undated.