The holiday season can overwhelm us with its Christmas jingles on repeat and cheap decorations that crowd the aisles of every big box retailer. In between RSVPing to holiday parties and cleaning the house for visiting relatives, donating to food drives and charities can become just another chore on our list of obligations. Why open our pocketbooks and write yet another check? Are there Americans who really need our help?

The answer is yes. Contrary to popular misconception that poverty in America is isolated to a handful of people, 40% of Americans between the ages of 25 and 60 will spend at least a year below the poverty threshold and 54% will spend a year in poverty or near poverty (150% of the poverty threshold). The US Census Report supplemental poverty measure found that 50 million Americans lived in poverty in 2012.

Uneven job growth compounds America’s economic disparity. During the Great Recession, 60% of the job losses came from mid-wage job sector while only 21% were from low-wage sector. However, in the aftermath, low-wage jobs accounted for 58% of the job growth while mid-wage jobs only constituted 22% of jobs created. In 2010-2012, retail, fast-food and employment service jobs alone created 1.7 million jobs, or 43% of post-recession job growth. The explosion of low-wage jobs exacerbates the decades-long trend of widening socioeconomic inequality in America. Fast food and retail employees work erratic part-time hours for low pay, frequently with no health benefits.

Today’s fast-food workers are not teenagers earning extra pocket money but rather primarily adults trying to make ends meet. From 2010 to 2012, 31% of fast food workers were between the ages of 20 and 24, while an additional 36% were between the ages of 25 and 54. Of the workers over the age of 20, 36% had a child. Further dispelling stereotypes, these are not high-school dropouts flipping burgers. Almost 80% of fast-food workers over the age of 20 had at least a high school diploma and one third had completed some college. Despite their educational attainment and experience, the majority (68%) earned between $7.26 and $10.09 and the second largest group (11%) earned the federal minimum wage of $7.25 or less. With the median number of hours worked per week at 30 hours, a fast food worker making $10.09 an hour would make just a little over $15,000 a year. These employees sustain their household on a pittance.

Given these poverty wages, it is no wonder that 52% of fast-food workers receive public assistance. By paying dismal wages that are impossible to live on alone, the fast-food industry shifts the burden of support onto public taxpayers. In total, fast food workers receive $7 billion in government assistance annually. Of those workers who work 40-plus hours a week, more than half still receive some form of public assistance, compared to only one quarter of the American full-time workforce who do. It is a moral outrage that a lucrative $200 billion-a-year industry employs a business model where reliance on welfare is the norm.

Fast-food corporations are not unique in this regard. The Democratic staff of the U.S. House Committee on Education and the Workforce found that one Walmart store alone not only cost their workers economic security, but also required one million dollars from taxpayers in public assistance. Walmart corporation is well aware that its workers cannot afford basic necessities on their meager pay. This was illustrated by a Thanksgiving food drive set up in a Canton, OH Walmart, which asked its employees to “Please Donate Food Items Here, so Associates [fellow employees] in Need Can Enjoy Thanksgiving Dinner.” This food drive exemplifies the deplorable living conditions created by low-wage companies. 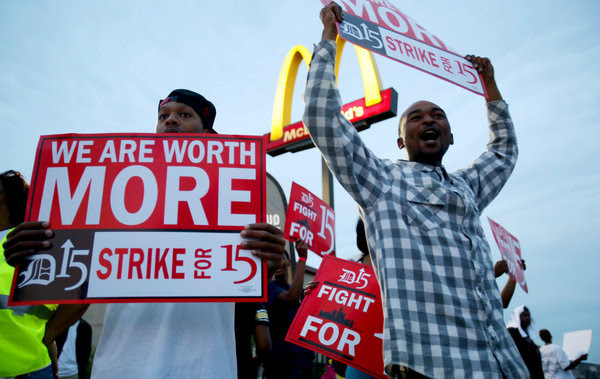 There is a silver lining amidst this dark cloud of widening income disparity. The fast-food workers' movement for a living wage has steadily been gaining national traction over the past year. What began as a one-day strike in November 2012 by 200 employees in New York has since grown to encompass support all across the country. Workers in more than 100 cities participated in the most recent one-day flash strike on December 5. What is striking about this growing labor movement is the movement’s ability to mobilize a historically voiceless group to deliver a consistent message. Their fight for $15-an-hour wage and the right to unionize without intimidation is a progressive step in improving the livelihoods of so many hardworking Americans.

We are told that holidays are a time of giving. We give to our loved ones, our colleagues, and our acquaintances. But what if we were told that our gifts could make this world a better place? Our donation to local food pantries and charities is a vital first step. But what happens when we think bigger? What if we envisioned an America where all people lived in dignity? An America where companies valued their employees fairly? An America where hard-working educated parents could provide for their children? While this change will not happen overnight, we each can make a difference. Be generous with the change that you can bring about.

*Peiley Lau is a 2013 Intern Scholar at the Oakland Institute.