Arrange a Place Where We Can Go and Visit Our Children: Jeyakumari Appeals the Government (Video) | The Oakland Institute Skip to main content Skip to footer

Arrange a Place Where We Can Go and Visit Our Children: Jeyakumari Appeals the Government (Video)

Tamil Human Rights activist Jeyakumari Balendran, who was arrested and arbitrarily detained by Sri Lankan security forces almost 1 year ago, has appealed to the Sri Lankan government to arrange a place where the parents of disappeared people can go and visit their children.

Jeyakumari made this appeal in a statement issued during the international media conference call held today in California, to discuss the findings of “The Long Shadow of War”, first independent report which details Human Rights abuses and property seizures in Sri Lanka, published by Oakland Institute.

Jeyakumari said she had admitted her daughter Vipusika, who was earlier detained and released by TID, at the Mahadeva Ashram again, as it is not safe for her daughter to stay with her given the conditions within which she lives.

Jayakumari in her mother’s house with no basic facilities

Jeyakumari’s full statement is as follows:

“The government should at least arrange a place where we can go and visit our children. I want my child. The new Government should consider my plight and take action to alleviate my difficulties” Jeyakumari said.

My son was shot dead by unidentified persons on October 26, 2006, when working at the 3rd mile post junction. Following that, due to security reasons, I was unable to stay there and was displaced with my three children to Kilinochchi. But my husband continued to stay in Trincomalee.

My second son was working in the Patients Welfare Society of the Kilinochchi hospital. Later he worked in the Puthukudiyiruppu hospital. After being displaced with me, he was killed in a shell attack on May 5, 2009. Both my sons were 19 years old at time of their killing. My third son was forced into the ranks of the rebel army as a child. He reportedly surrendered to government forces in 2009 but has gone missing. I don’t know what had happened to him. My husband died of cancer in 2012.

When I was participating in protest rallies in search of my third son, I was arrested on March 12, 2014 and was interned in the notorious ‘Boosa’ prison. I came out of the prison on March 10, 2015. After getting out of the prison, I brought my daughter Vibushika from Mahadeva Ashram, with the permission of the court, to keep her with me and educate her.

After coming out of the prison, I went and inspected my house and then I realized that everything in my home had been stolen. They have stolen everything in my home including roof tiles. Not even the kettle used to prepare tea was spared. Authorities failed to safeguard my things after arresting me. They now ask me to identify the persons who stole my things.

So I tried to find a house to rent in Kilinochchi. But everybody refused to rent me a house due to fear. Because of this and after keeping my daughter for just a few days with me, I realized that it is not safe for my daughter to stay with me. Hence I appealed to the court again and had admitted her again at the Mahadeva Ashram. There she will be safe and she will be able to study.

Currently I am living in a small hut of my mother without any security. No facilities are available here. I am living here without any peace of mind. My daughter Vibushika, separated from her mother, is highly grieved because of the absence of her three brothers. She is also suffering from wheezing. I am forced to live separated from her and yet she is is very close. When I went to see my daughter there, she said that she doesn’t want to stay there and requested me to take her with me.

All I want is to educate her and be with my daughter. I do not know how this will be possible given the situation I am in now. My daughter is also subjected to psychological stress.

I have met this fate because I tried to search for my missing son. I don’t know where my son is, what he is doing now, or why this government is not releasing him so far. I was confronted with many questions in the prison. I had to bear the burden of a crime that I have not done. I am very frustrated with my life.

At least the new Government should take action to release my son. So many mothers like me are wandering from place to place in search of their children. We need answers.

The government should at least arrange a place where we can go and visit our children. I want my child. The new Government should consider my plight and take action to alleviate my difficulties. 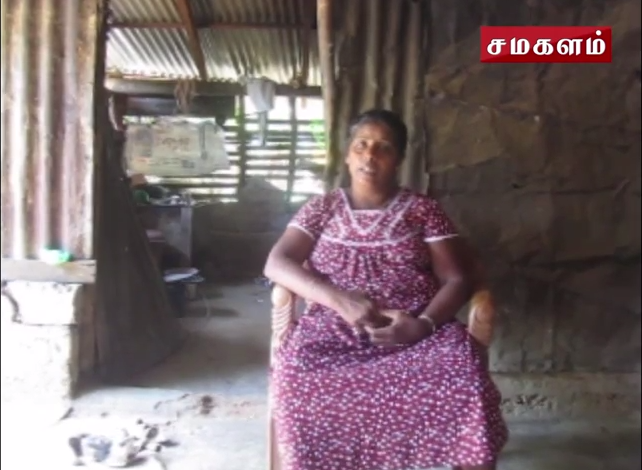